Making an analysis “Well to wheel” of the main propulsion systems with different paths, it can observe that the total efficiency of various HOPE engines (Diesel, SI- spark ignition and PHE – pneumatic hybrid engine) is placed between the pure electric propulsion (if use only green energy) and the actual Diesel engine.  The hydrogen HOPE with exhaust gas recovery achieved as a pneumatic hybrid engine (PHE) is even more efficient than the fuel cell. For all HOPEs the CO2 emission is low and completely absent if it is used the hydrogen as fuel.

A simple HOPE is cheaper than actual engine even it can achieve a fuel economy and a CO2 reduction superior to 30%.  The vehicle with HOPE and  PHE having exhaust gases heat recovery system is more efficient than an actual hybrid electric vehicle and is not expensive. The client can recover the supplementary cost of around 1500 – 2000 $ in one or two years, which is not the case for the actual hybrid electric vehicle. 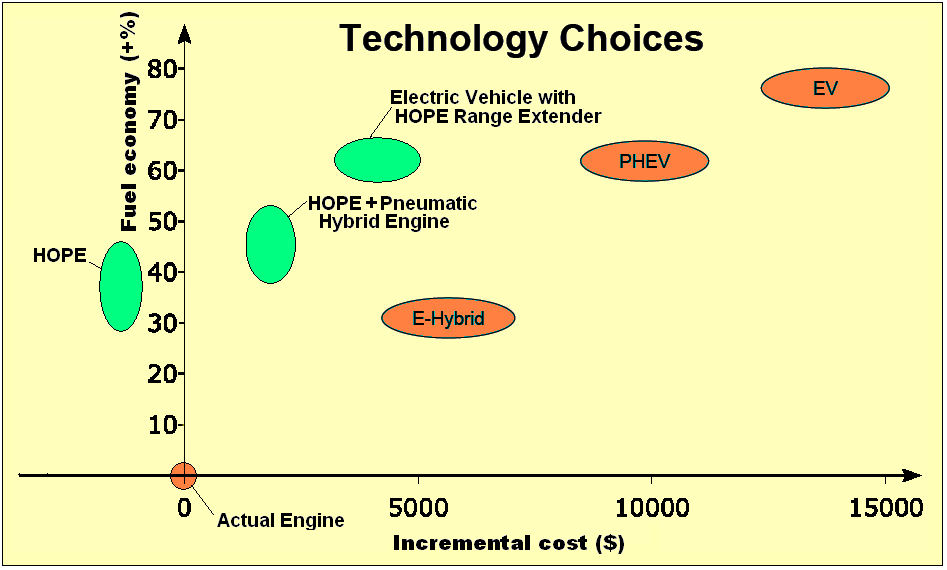 Also in the utilization for electric vehicle with extended autonomy or for hybrid electric vehicles the proposed concept reduces the costs and leads to supplementary advantages as the reduced NVH level.

The main advantages of this concept engine are:

For a middle class, gasoline car ( M=1300 kg, Cx= 0.30, S= 2.2 m²), the comparison with the calculated fuel consumptions between conventional and HOPE SI engines is described in the table 1.

For a typical diesel truck, the comparison with the calculated fuel consumptions between conventional and HOPE diesel with heat recovery is described in the table 2.

For an urban diesel bus, the comparison with the calculated fuel consumptions between conventional and  HOPE diesel is described in the table 3.