The two-stroke engine can use two stepped pistons 11 which achieve two superchargers 12, included in the same volume of the engine. To supply the engine with air are employed some intake flexible valves 13. The superchargers 12 deliver the compressed air by some transfer flexible valve 14 first in a collecting chamber 15 located bellow the combustion chamber 16. When the piston 11 opens the intake window 17 the pressurized air enters into combustion chamber 16. During scavenging, which is uniflow type, the pressured air replaces the burned gases which leave the cylinder by an exhaust window 18. The employing of the two internal superchargers 12 is a very important feature comparing with the state of the art two-stroke opposed piston engines, because are not necessary auxiliary systems to obtain the scavenging of the combustion chamber. In this case a turbocharger can be used only to obtain a two stage supercharging and an extreme power density of around 2.5 kW/kg. The fuel is injected directly in the combustion chamber after the exhaust window 18 is closed. The lubrication system is similar with that used in four-stroke engine and the fresh air is not mixed with the fuel.  We can conclude that this two-stroke toroidal piston engine, unlike all the state of the art versions above, ensures a big air flow for scavenging process, performing also the supercharging of the engine if this process is correlated with the back pressure existent in the exhaust system. This engine has extended expansion stroke. 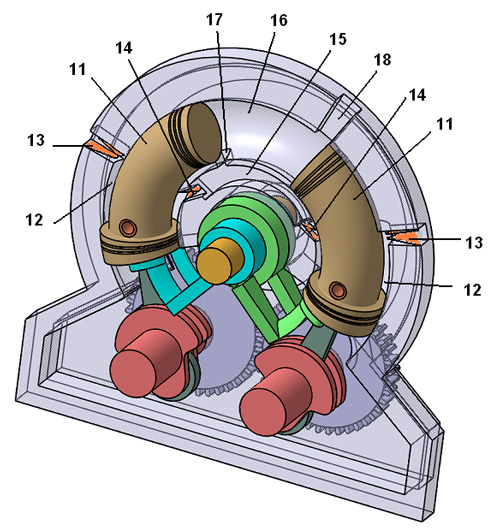 A 3D simulation of a two-stroke engine was realized to demonstrate the feasibility of the concept.

The two stroke engine can be achieved in many other constructive variants which are protected with different patent applications, including a variant with a single crankshaft.